We are happy to share our expertise, our skills and practical experience through workshops, further education and lectures.

We have taught established and aspiring professionals in film making in Europe, Africa and most recently in China in English, German and French.

Filmmaking is a process of collective creation. Every successful film is based on a good and professional script. We define script as “the film on paper”. It is the dramatic and cinematic adaptation of a thought-provoking, fully developed story, which serves as the blueprint for shooting. The story, the characters and their universe, the topics and every other aspect must be fully worked out AND fully adapted to the narrative and cinematic structure of film.

Art stems from mastery and is somewhat bound up with communication. Films must be seen by as many people as possible, indeed the most varied audiences as possible. Due to the immense production costs involved in film, this art form must be popular. We define a film as successful above all when, in addition to receiving regional attention and recognition at festivals, it can reach and move everyday people, and draw them into the cinemas. Audiences finance our art – through the taxes they pay, which flow into film-funding, through television fees and through the cinema tickets they buy.

But the audience – this under-appreciated entity – has an even more important function: to be an ally in filmmaking. In contrast to a novel, a film cannot be arbitrarily long. As a general rule, scriptwriters have around 100 minutes to tell a complete story as visually and grippingly as possible. When revising scripts, all possible omissions must be made – without leaving anything out. The writer has to use the collective unconscious of the public – e.g. using archetypal narratives and myths. In films, we should only relate as much as is absolutely essential. Omissions must be well prepared and made tangible through well-placed allusions. Then the viewer is in a position to read between the lines. In a film with a good script, a viewer’s personal history and experiences suffice in this task. Your film will be a success if you succeed to involve the audience as far as the viewers complete your piece of art. 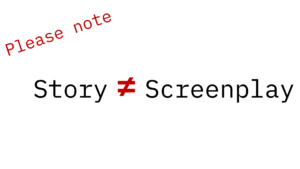 Right from the outset, a clear distinction must be made between the idea, the subject matter/story and the script. This is not simply a question of the formatting of the content. Often initial ideas are developed into subject matter and stories by simply presenting them in script form. A story is far from being narrated cinematically just because the layout was made using an IT script program.

The actual, qualitatively decisive script work should only begin upon the full maturation of the story. As it happens, around 90% of the international scripts destined for the market that we have reviewed either lacked a fully narrated story or were poorly adapted for film – usually both. (And here we’re only talking about the film scripts, which have already overcome some challenges: e.g. they are already being represented on the international market by sales companies and are looking for distributors and investors.) 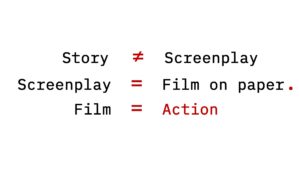 From a single idea, a story with a beginning, middle and a surprising ending will hopefully emerge. An excellent result, but this still has nothing to do with film. The film only begins at the moment when this story, this raw material is transformed into a real script, and by that, we mean a film on paper. Strangely enough, that has less to do with writing in the sense of easily legible literature, and more to do with composition. The art of film is only created if it succeeds in tapping the full potential of the story and telling it as intricately as possible in cinematic form. With the potential of the story fully exhausted, it’s possible to break rules and create real, popular and interesting art. It’s a risk, but an incredibly satisfying one, if the story and its possibilities can be fully revealed. 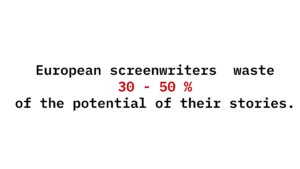 If attempts to carve out universal elements (themes, archetypes etc.) fail, a film can still become a so-called national, regional success. It’s an even bigger ridicule in smaller countries than in larger ones. But none of this changes the fact that in all these cases a great deal of potential has been squandered. Many US-films are successful with bigger audiences because they simply cannot afford to waste potential. Their films are not financed by tax-payers money. Films from EU countries have to “travel” on account of the size of the market and the often poor infrastructure of cinema. They must be evaluated internationally, seen at least in Europe and what’s more, by a broad audience – not only at festivals. Sadly this is a feat that less than 10% of the 1200 films that are produced yearly in Europe manage. For the most part, the failure of European films lies in the story elaboration and the transformation of the under-developed story into a script | film on paper. (Inadequately narrated story, insufficiently adapted for this art.)

Authors often lack competent and creative partners. Perhaps the average producer can’t fulfil this role nowadays, because they are overwhelmed with small infrastructural matters, finding solutions to administrative and financial issues, in short: the bureaucratic problems of film production.

In the area of brainstorming, development of material and scriptwriting, but also the script analysis and consultation, ongoing further training is a necessity. There is no recipe for success, only experience. One can only learn effectively from the masterpieces with expert guidance. dfk*films intend to provide practical and theoretical input so that people who want to write seriously and professionally develop ideas, subject matter and scripts, alone or in teams.

Training and further training – in the most heterogeneous groups as possible – with or without personal projects is very important to us. Our seminars, workshops and lectures are tailored towards:

SSO | 40*Steps-Method and the genesis ouf our aproved method…