For years our founders produced and distributed films for purely personal and emotional reasons. In the mid 80’s, as the Zürich based Cactus Film was at the height of its powers. But they had still no idea how to evaluate screenplays. After having produced around 20 films and having exploited some 300 films in Switzerland and worldwide, they asked themselves why the majority of their artistic and political films were failures. The desire to understand what the essence of a film is grew ever stronger – and also the economic necessity to do so. Toward the end of the 1980’s, Donat F. Keusch met František „Frank“ Daniel – it was to be a decisive encounter. 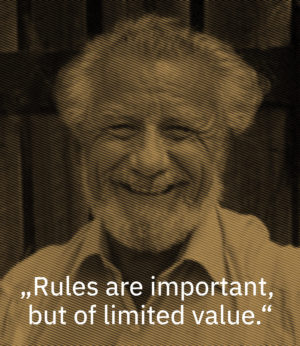 František „Frank“ Daniel looked like Zeus. He was teaching both the basics of storytelling and script writing, as well as analysis of scripts and film. He has been the former director of the Prague Film Institute until his emigration in January 1969. In the USA he worked at Columbia University, the American Film Institute, as the dean of the USC film school and was a board member of the Sundance Foundation. To this day we recognise František „Frank“ Daniel to be the greatest of all scriptwriting and script analysis teachers.

Frank taught the rules, but then showed their limitations. He taught us to accept contradictions. A screenplay writer should know and master the rules of scriptwriting. And they need the talent and courage to break them so that the story is allowed to unfold freely. Through mindful study of their story, it will let them know where rules can be broken. Only then is it possible to transcend craft and create art.

Aside from the manner in which one gets from the craft of scriptwriting to the art of film, Frank taught us discretion. Throughout the 70’s and 80’s, he ranked as one of the most important film-makers – and studiously avoided being named. Why? Not least because writers and consultants in the film industry are paid significantly more if they remain unnamed. Frank also refused to distill his teachings into a book. He wanted to prevent them from sharing the fate of most teaching manuals – being mindlessly used as recipe books. And let’s be real here – would you want to collect a prize together with your “script doctor”?

In the early 90’s, Donat Keusch led a workshop with Paul Schrader on behalf of the Focal training foundation. During one session, Paul went into depth about his writing technique. It quickly became clear to Donat that Paul’s approach could be harnessed as the basis for serious screenplay analysis. Our script*service, at that time still operating under the umbrella of Cactus Film, had already analysed many scripts that were looking to be financed by the presales of distribution licenses on the international market. The evaluation of screenplays should be as objective as possible. Therefore, we were looking for a system that could improve the quality of our analysis of scripts.

Paul Schrader had developed the stories and scripts for TAXI DRIVER, RAGING BULL, AMERICAN GIGOLO, THE LAST TEMPTATION OF CHRIST amongst others using his 40-Steps-Method. He called each Step an “event”, referencing the events that guide or pushes the protagonist to get closer to his/her central goal.

Paul would only begin to develop an idea into a story if it persistently refused to leave his mind. He told a variety of people the most important events | steps of his story. The listeners reacted to his narration. Drawing on their reasonable and helpful reactions, he developed the next steps and so on. His story was usually complete when he had collected around 40 Steps. He compared his modus operandi with that of the storytellers in the market places of ancient times. Finally, Paul adapted the 40 Events of his completed story into the scenes of his script. 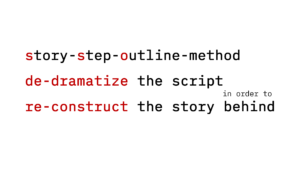 Paul Schrader’s writing method inspired us to take additional precautions to improve the objectivity of our analyses. His Story-Step-Outline with around 40 “events” for 90 to 120-minute films could be excellently re-purposed to see through the script to the essence of the original story, in a kind of de-dramatisation. In this way, we gain both a clear view of proceedings and at the same time the necessary distance to judge the quality of the script more objectively.

We conduct our detailed and professional script analyses as follows:

Paul Schrader’s 40-Steps-Writing method is one of a kind, as is our analysis method that’s modelled on it. It goes without saying that the script for an extra-long film consists of more Story-Steps – James Cameron’s TITANIC has 54 with a total length of 3 hours. Our 3-tiered detailed analyses are amongst the most objective and auspicious in the film industry, thanks to the Story-Step-Outline (SSO) Method.

What is a Step in a script? How does one go about identifying one? As mentioned above, Steps are the events/happenings/actions which bring the protagonist closer to his/her central goal. They can only be determined if there is a protagonist and if his/her main goal is identifiable. This is also true in cases where the main character fails to achieve the goal (e.g. tragedy) or only partially achieves it (e.g. melodramas).

Why 40 Steps? It has been shown that an average audience can perceive and take on board around 40 happenings (“events”) in a 90 to 120-minute film. Less than 30 in a film of this length will not challenge an audience enough, and likely frustrate – too little action for the entrance fee! More than 50 would be strenuous. Although Billy Wilder and I.A.L. Diamond didn’t give a thought to “events” while writing, both SOME LIKE IT HOT and THE APARTMENT are told in 40 Steps.