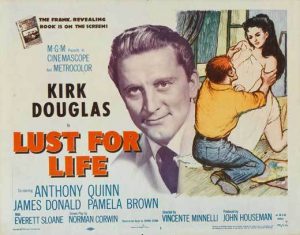 Van Gogh’s life was dominated by art and illness, euphoria and horror, desire, suffering and passion. The son of a priest longed for love and was exhausted in art.

Due to the outstanding cast this filmography became a classic of the genre. It follows the biographical facts with care and respect and shows the most important moments in van Gogh’s life: his missionary work in the Belgian mining area of Borinage, his relations with his brother and Paul Gauguin, the lack of understanding in his neighborhood, his financial difficulties and his early death in Auvers-sur-Oise. The film impressively and excitingly conveys the creation of some masterpieces by this exceptional artist. Kirk Douglas, who celebrated his 103rd birthday on 9 December 2019, was deservedly nominated for an Oscar for his interpretation of the great painter.

Donat Keusch studied psychology and journalism. Since 1971 in the film industry: distribution, world sales, production, screenplay and teaching. Feature films: “Les petites fugues” and “Yol” (Golden Palm in Cannes) and many more. For 30 years working as script analyst/consultant/writer. Trademark: Pseudonym or unnamed. – Motto: “The script is the film!”