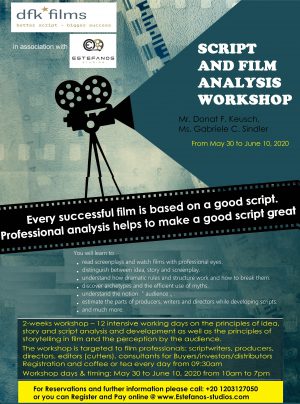 Every successful film is based on a good script.

Every good script is based on a well told story.

In this workshop you will learn how to identify a good script.

Since 1988, Mr. Keusch and since 2002, Ms. Sindler have been committed to improving story and script writing.

Every year dfk*script*service evaluates 180 scripts looking for financing on the international film markets. To date our script*service handled 3000 screenplays.

Our experience in film production and distribution, as well as the interaction with script specialists enabled us to develop a successful script analysis system: the dfk*40-steps-method.

In autumn 2020 you have the chance to learn the basics of the professional and successful system of Script and Film Analysis in Cairo.

The further training is tailored towards: